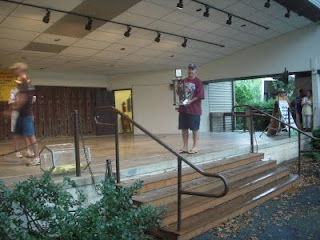 We had a great time at New Holland Summerfest again in spite of Hurricane Irene and the dire weather forecast.
Irene was lady enough to hold off her approach until after the awards ceremony. Five teams decided to sit this one out due to the weather so instead of the usual 72 teams, only 67 teams were on hand. Norma and I arrived early Friday morning and put up the new 10 x 20 canopy and were followed by Brian, Stephanie, Bertie and Pat, then Mike and Trina and Michael & Maddie. Ron v2.0 was unable to make this one due to other commitments. Friday was actually very nice weather wise and the usual site and food preparations proceeded smoothly. For those of you familiar with this competition, you know that there are three distinct sections to the park. Once you’ve competed at New Holland, you usually get the same spot year after year. Our site is located in the Far West section. This section is the furthest from the judges and turn in location, but generally have larger sites. We are very fortunate to have this location. We have great neighbors on either side with nobody in back or front of us, so we have room to spread out somewhat.

After setting up the site and having our meats inspected, we started our meat prep and this is where our routine
set in and we go about our business in a somewhat orderly fashion. Our only hiccup was the sausage. We mix and grind our own, but for some reason the hand grinder we use wouldn’t fasten to the table firmly. This made for some pretty comical actions and we had to adapt on the fly and change our plans. We made sausage balls instead of sausage links, but we thought they turned out very good. I have to hand it to Brian for his recipe and
enthusiasm for this category. He was up to at least 3:00AM putting the finishing touches on it. The cooks on the other meats went smoothly and our turn ins were on time. Immediately after the last turn in, we started breaking down the site because we wanted to leave as soon as possible due to the approaching storm. Some of the teams decided not to stay for the award ceremony. We had mixed emotions because we heard they might close the bridges over the C & D Canal which we had to cross to get home. Mike & Trina decided to not take the chance and headed out before the awards to be our scouts.

We thought our cook went well and hoped for some good results. Well we did get some good and some not so good finishes. We placed 14th in sausage, our first entry and 9th in Chef’s Choice. The four meats were next and we waited. Chicken brought us a 5th place with a plaque and check. A 1st place in Ribs shocked me and I was in a bit of a daze while receiving the trophy and check. Pork and Brisket didn’t fare well with a 33rd and 41st place respectively. We did finish 8th overall which made us very happy. Any top 10 finish with the level of competitors that were there made us very happy.

I would like to thank the friends and family that braved the weather predictions and visited us. This is one of the reasons we do this activity. The ride home was a little stressful due to the storm, but made easier with the finish we had. We were relieved to see the bridge still open and ran into the house after removing the cold items and a few other essentials and left the rest ‘till the next day. Clean up and restocking of the trailer took longer than normal because of the high winds and we took two days to complete it. Next up is Shrewsbury, PA in 2 weeks. If you’re in the neighborhood, stop by and say hello.

Posted by PigheadedBBQ at 6:22 PM No comments: 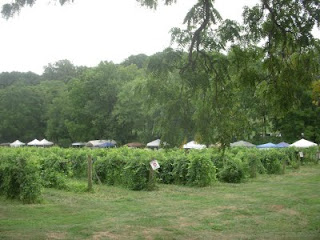 On Saturday Aug 6th, a condensed version of Pigheaded BBQ once again competed at the Victory BrewBQ at the Twin Brook Winery at Gap, PA. This is a Mid Atlantic BBQ sanctioned event and is the 3rd annual BrewBQ and there was a slight venue change. Instead of being located on one of the rear fields, the teams were situated on the front of the winery. The sites were along a tree line, just in front of the vineyard. Also competing there was 340Q which consisted of Mose & Annie Zook, good friends of ours from the Middletown Farmers Market. This was their first competition as cooks and not organizers, as they usually are at the Middletown BBQ Cook Off. There were a total of fourteen teams this year, down a little from last year. The weather called for a nice day with rain moving in late in the afternoon and the weatherman delivered as the rain held off ‘till we were pulling out of the Twin Brook Winery’s driveway after the event was over.
The cook sites were smaller this year due to the change in venue and we had requested a larger spot. We arrived early and were able to get the far end site, allowing us to spread out a bit. Ron, Brian, Stephanie, Norma and Bertie were in attendance as this was a small one day cook. Chicken and ribs were the only two categories. I had been working on a new rib recipe and was anxious to see how it would work out. We set up our site and as soon as the meat was inspected, the chicken was rubbed and set aside to chill and the prep work on the ribs was started. All was ready and we then had a little time to relax and visit some of the other teams. Mose and Annie looked relaxed and confident and everyone was in various stages of prep work. We saw some familiar teams and a few first time teams as well. It’s always nice to meet new teams and make new friends.
The cook went pretty much as expected, but the ribs were not quite as well done as we would prefer, so out of six racks cooked, only one was suitable for turn in as far as we were concerned. Keep in mind that competition ribs are not supposed to be falling off the bone as that’s considered overdone. That being said, ours were underdone in our opinion and could have used a little more time on the pit. We didn’t have high expectations for the ribs, but the chicken was done to our satisfaction and we’ve been doing pretty well with that category lately.
Off we went to the awards ceremony with mixed feelings and waited to hear if out name would be called. The first category called was chicken and Pigheaded BBQ was called for 4th place, a little disappointing, but not too bad. We had won this category the last two years and kind of expected to do a little better. Just goes to show why they call it a competition. We were happy with our chicken so that’s all you can ask for I guess. Ribs were next and once again, Pigheaded was called for 4th place. This was better than we thought we would do considering we weren’t happy with our turn in, so it all evens out in the end. For the overall, Pigheaded was called yet again for 4th place. Well, we were consistent if nothing. Our friend from RA McCoy Welding was 1st in chicken and the overall winner and we were very happy for him, as this was his first win I believe. The 1st place rib winner was Son of a Beach Junior. The younger members of the team cooked this competition and did a fantastic job. Well done!!
We had a great time and plan on being back next year. Congrats to Mose & Annie for their 7th place chicken, 8th place ribs and 8th place overall.
Posted by PigheadedBBQ at 3:22 PM No comments: