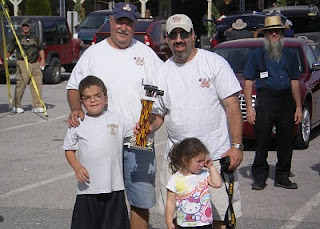 Pigheaded BBQ finished their 2010 season at the Markets of Shrewsbury, for the 2nd annual Southern York County BBQ Cook off. This was our second visit to this competition and the organizers, Ben Kauffman, Alicia Herbst and staff did another great job. The field of competitors just about doubled over last year to 29 teams. The best news was NO RAIN this year. Last year's competition was held in a steady downpour and this year, the weather was great. The trip down was fairly smooth despite the fact that the adaptor on our trailer harness was faulty and we didn't have brake lights or turn signals on the way down.

Though the sites were a little tight, but we didn't have any trouble getting in and set up. This was due to our early arrival and my wife Norma and son Ron v 2.0 who made the chore pretty easy. We were a bit lucky in the fact that the team on one side of us wasn't there yet and we could pull the trailer in pretty straight through their site. Once the major chores were done, Norma and I went to find an automotive store to get a new adaptor and a grocery store for some garnish while v 2.0 stayed back and all but completed setup of the site.

Mike and Trina along with grandchildren Michael & Maddie joined us later and the usual chores of meat prep was completed and finishing touches of the site was done. Dinner was a combination of fare from the farmers market and angus burgers cooked onsite by v2.0. Norma, Trina and the kids went to the hotel for the night and we set up the cookers readying them for the big meats which were to go on late night/early morning. Brian arrived later and started on his chef's choice entry so that it would be ready for tomorrow. A chill was in the air as we put the big meats on and I tried to get some rest. Mike, Ron and Brian stayed up as usual keeping an eye on the pits and grabbing some sleep as well.

It was a very cool morning and ribs and chicken and sausage were the next meats to go on. Sausage was due at 11:30, chicken noon, ribs 12:30, pork at 1, brisket at 1:30 and chef's choice at 2. No rest for the weary now, as crunch time was here as well as Norma, Trina and the kids. Everyone pitched in and the final preparations were done smoothly and efficiently. Everything was turned in on time with very little rushing and we settled back and started cleaning up, breaking down the site and waiting for the awards ceremony at 4:00PM. Our fate was in the judges and all we could do was speculate on how we might have done. Hopes were high and we felt that we had done pretty good, but would the judges agree.

We shleped our chairs to the awards site and waited for the results. First up was sausage. At the cook's meeting last night, some new interpretations on what would be accepted almost caused us to not enter this category. We decided to change our original thinking and changed our entry. v2.0 and Brian were glad we entered, because we placed 7th in sausage and a new ribbon added. Next up was chef's choice and again we heard Pigheaded BBQ's name called, this time for 2nd place. A trophy and check were the reward for this entry. Chicken and ribs were next and our name was not called for these categories. Pork did bring us another ribbon and a 10th place finish. Brisket, which we had high hopes for was a letdown as we didn't hear our name for this category either. Altogether we finished:
7th in sausage, 2nd in chef's choice, 14th in chicken, 27th in ribs, 10th in pork and 11th in brisket and 18th overall. Not a great finish, but not dismal either.

Pigheaded BBQ had a good 2010 season and we improved in pork and chicken over previous years. We have some work to do on ribs and brisket, but we have all winter to practice and we have high hopes for next year. Thanks to all of the crew for their hard work this year and thank you to all the friends and family who have showed up to support us over the season. We look forward to seeing you and all our bbq friends on the BBQ circuit next year.
Posted by PigheadedBBQ at 1:20 PM 2 comments: 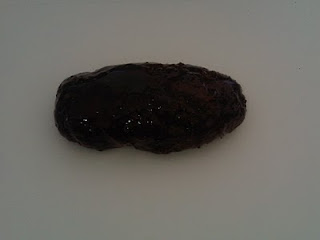 Sent via BlackBerry from T-Mobile
Posted by PigheadedBBQ at 11:20 AM No comments:

The meat is on! 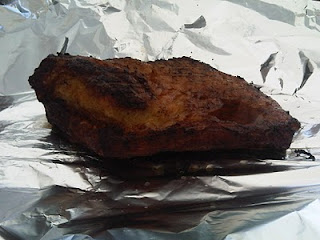 Sent via BlackBerry from T-Mobile
Posted by PigheadedBBQ at 10:10 AM No comments: