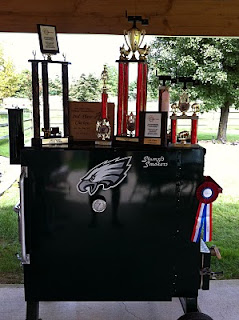 Pigheaded BBQ had it's best year ever in 2011. It looks like the teamwork and practice is starting to pay off. Although we ended the season on a low note at the
3rd Annual Southern York County BBQ Cook Off in Shrewsbury, we still had a very good year. Yes it's tough to end the season like we did, but we have only higher hopes for next year. In Shrewsbury, we placed 2nd in Chef's Choice, 8th in Sausage, 6th in Chicken. 26th in Ribs, 21st in Pork and 19th in Brisket for a dismal 21st overall. Oh well, enough dwelling on the bad.

We started out the season in Salusbury, MD, then cooked Middletown,DE - Wildwood,NJ- Gap,PA-New Holland,PA and Shrewsbury,PA. We had originally signed up for the Sam's Club event in Chesapeake, VA, then decided to do the event at Harrah's Casino in Chester, PA. Well, once we pulled out of Chesapeake and registered for Chester, the competition was cancelled. Our place had been taken in Chesapeake so we missed out on that one. Not one of our best decisions.

I think the team worked together very well as a unit and had a good time. Family is what this team is about and everyone seems to enjoy themselves at the competitions. Along with family, the good friends that support us and attend the events as well make the whole experience more enjoyable. We have made some good friends on the circuit as well and it's always good to see them and when we have a chance, find out what's new in their lives. I don't think there is a finer group of people competing against and willing to help each other out as the BBQ teams we've met.

You can bet that a lot of practicing will be going on over the off season, and who knows, maybe even a class will be taken. We are already looking forward to Salisbury, April 2012.
Posted by PigheadedBBQ at 12:16 PM No comments: