Dover Downs, we came we saw we got SMOKED!!! I’ve been trying to put this competition out of my mind, and with my sieve for a mind I truly hoped I could forget it. Well, I can’t. This one will be in my mind the entire winter. The weather was typically Dover. In other words “Dover Blows”. In fact, I had tee shirts made up last year stating just that. They sold like hotcakes. The rain, chill and winds lasted most of the competition.

Despite the weather, the cook went very smoothly. The smokers hummed along all night through the wind and rain, without so much as a hiccup. Our meats turned out like we planned with the possible exception for chicken. We thought they were a little too spicy. We had high hopes for at least the ribs and brisket. We went to the awards ceremony hoping for a top 5 call in at least one category. Alas that was not to be. We weren’t even close in any of the categories, in fact we were in the bottom half of the 81 teams for all four categories. The dismal results are as follows:
Overall: 61 out of 81, Chicken: 54th, Ribs: 48th, Pork: 72nd, Brisket: 43rd
We can’t blame the weather, we can’t blame the judges, we can’t blame anything because we don’t know why we finished so low. We can only chalk it up to the old saying: “On any given day…”. On April 16-17, 2010 in Salisbury, MD we will try to redeem ourselves. Yes it’s going to be a long cold winter for Pigheaded BBQ.

Thanks guys for a very good season. We had our ups and downs, but all in all, this was our best season yet and despite Dover, we are improving. Keep your heads up and keep on smokin’!!
Posted by PigheadedBBQ at 2:51 PM No comments: 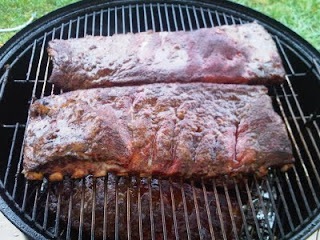 Can you smell the love?

Ron v2.0
aka The Butt Doctor
Sent via BlackBerry from T-Mobile

Posted by PigheadedBBQ at 9:00 AM No comments:

What's a guy gotta do to get some pancakes? 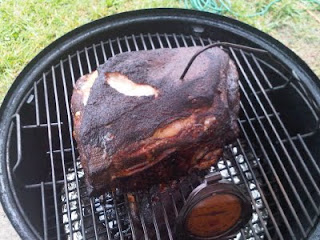 All-
Checking in from the Diamond State BBQ in Dover, DE where the temperature is a balmy 46 degrees and the forecast calls for overcast skies with a 60%chance of showers. Bullshitake!

It's cold, wet and we're loving every pouring rain drenched minute of it. Our butts (pictured above) are looking phat, ribs are sticky icky, the brisket is smoking and the chicken is prepped and clucking beautiful. Barring a complete disaster (and Mother Nature is sure as hell trying) we're aiming to take down the big dawgs.

Ron v2.0
aka The Butt Doctor
Sent via BlackBerry from T-Mobile

Posted by PigheadedBBQ at 8:58 AM No comments: 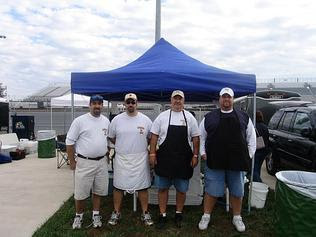 Hello All-
The local boys got some nice pub in today's Middletown Transcript. After all of this stardom, now it's time to bring home the BACON!!!!

Be sure to stay connected by following us on Twitter http://twitter.com/pigheadedbbq

Posted by PigheadedBBQ at 5:37 PM No comments: With the weather looking pretty ominous for the upcoming Diamond State BBQ in Dover, DE on October 17th and 18th, team Pigheaded looks to continue our recent hot streak and bring one home a Grand Champion trophy (and check) for the "First Staters".

At this point we've learned to expect the unexpected. The elements have actually become a rallying cry of sorts and help us focus on what we do... Que! The last two events have both been "moist" to say the least. And at both we fared pretty well, the last of which was a 3rd place finish @ the Southern York County BBQ Cookoff. But you're only as good as your last turn-in.

Pop's got some new kicks that should help to keep those old dogs nice and dry. And with some tricks up our collective sleeves, we aim to dress warm, act cool, cheer on the Phightins' and bring home the bacon!

So, dust off the Gordon's Fisherman Halloween costume from 1987 and get your pork butts to Dover. It'll be well worth the trip!

Posted by PigheadedBBQ at 2:42 PM No comments:

Well, I had the time to try two new methods of cooking pork butts. They were very different from each other and our normal pulled pork. After cooking them, I divided them into packages labeled very creativly #1 and #2. I gave a sample of each to teamates Ron Jr and Mike and their wives. My wife and I tried them as well. Without talking to each, the unanimous decision was #2. I guess we'll have to try and replicate that result in Dover this coming weekend. I hope the judges like it as much as we did. Looks like we're in for some damp chilly weather at Dover. Wish us luck.
Posted by PigheadedBBQ at 5:16 PM No comments: