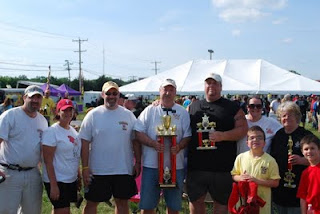 First order of business is to apologize for the lapse of posts. OK, enough of that, now onto the current BBQ season. This past weekend, Pigheaded BBQ competed in our second competition of the season.


On April 15-16th we were in Salisbury, MD for Pork in the Park. This contest traditionally kicks off the season for many in the Mid Atlantic area and despite the gloomy weather forecast 116 teams signed up to compete here. I would like to say that we started off with a bang, but alas it was not to be. While we certainly did better than last year, we still finished a lowly 62nd out of 116 teams. We did have a strong showing in Dessert (11th) and Chicken (18th), we weren't so strong in Ribs (79th), Pork (60th) or Brisket (75th). We certainly hoped it was the long hiatus over winter. While not happy with the results, we weren't totally discouraged like we were last year. One good thing that happened, or rather didn't happen was the horrific rain and winds that were predicted. While we did have some sprinkles and some wind, Mother Nature was kind enough to hold off the main event 'till after the awards ceremony , giving us a chance to get out of Dodge while the getting was good.

Next on the calendar was Middletown, DE which most of you know is our hometown. On Thursday, May 19th we found out that the Dover, DE competition had been canceled making Middletown the only Delaware State Championship this year. So what's the big deal you may be wondering, well that makes Middletown an automatic qualifier for the Jack Daniels World Championship for the winner. This is a big deal in the BBQ world and the stakes were just raised.

We were psyched, not only because this was our home turf but also the added incentive of the possibility of qualifying for The Jack. The weather forecast was also spotty for the two days and we hoped for the best. We did get rain on Friday, but Saturday turned out to be a great weather day.
Our cook started off on Friday with the Chef’s Choice category which my son Ron v2.0 prepared. It was a mini tower of goodness featuring tomato, onion, avocado and lump crab meat. It was a work of art and tasted just as good as it looked. Next was the dessert category, which my wife Norma cooked. This was a little stressful for her as it was open to anyone, not just the BBQ competitors. Bakers, culinary students or anyone who like to do desserts were allowed to enter, cooked on or offsite including professional kitchens.

Saturday was all about the meat with the four usual categories: Chicken, ribs, pork and brisket. We felt the chicken was on point, the ribs we turned in were the first baby back we ever submitted in a competition, the pork turned out very good and the brisket was not up to our standards. Now we had to wait to see if the judges agreed. We arrived at the awards ceremony and had just settled in when we were informed that there had been an incident at our site. I went back and found out that some trash bags at the site next to ours had caught fire and were very close to our truck. Some fast acting neighbors sprang into action and using our fire extinguisher and water buckets put out the fire with the help of my son-in-laws mother who had stayed back at the site. No damage was done and I went back to the awards ceremony.

The first category called was Chef’s Choice and we didn’t hear our name called but found out we placed 7th. Next up was Dessert and the 1st place winner was Pigheaded BBQ. Norma was so excited I had to help her up to accept the award. I got the trophy and she got the check. Oh well, she’s not the CFO for nothing. Next category was chicken and 1st place winner was……Pigheaded BBQ. What a great start, another trophy and another check for the CFO. Ribs were called next and we didn’t hear our name called. Oh well, we were still off to a great start. The pork category was next and Pigheaded BBQ was called again, this time for 4th place. Great job Mike, you nailed it. The last category was brisket and we were pretty nervous because we felt if we didn’t tank ribs and we got a call in brisket, we had a chance for the Best of Delaware award. We didn’t hear our name called in brisket and found out that we finished a lowly 38th in brisket. While we didn’t get Best of Delaware, our good friends Slower Lower did and we were very happy for them. All in all it was a very good weekend for Pigheaded BBQ. Another great event organized by Mose Zook, Ben Riehl and crew and another chance to work as a family unit and see our BBQ friends. Next stop, Wildwood, NJ July 8-10. Hope to see you there.
Posted by PigheadedBBQ at 7:51 PM No comments: