Pigheaded BBQ competed for the first time at Smoke in the Valley BBQ Fest in Green Lane, PA on May 8-9 this year. We had heard many good things about this event and they were all true. This event is run by Shawn Tucker and what seems like the whole Green Lane Fire Dept. along with many volunteers. What a first class event. Everyone went out of their way to ensure that your every need was fulfilled.

Norma and I decided to head up on Thursday because we had heard stories of what the field was like when it was wet and the forecast was predicting potential heavy rain and winds and we wanted to pick an easy in and out site. When we arrived we met Shawn and he let us pick a site that was convenient. We then started putting up the big canopy that we use for inclement weather with some help from the good folks @ Pequea Pullers. After the canopies were up and the site situated, we settled in for the evening. It was an eventful night, sleeping on two stacked air mattresses and Norma with a bad hip. Let's just say that we would have easily won America's Funniest Home Videos if someone had a tape of it. If you want further details, you have to ask in person because it probably doesn't translate well in writing. Anyway, the weather held out Thursday, Friday and Saturday 'till after we left, so we had a lot to be thankful for. Pigheaded BBQ was going to be a much smaller team as Ron v2.0, Trina and kids as well as Brian couldn't make it, so we decided to skip the ancillary categories and relax Friday, taking in the bonfire and visiting with new friends. I have to say, I really enjoyed the relaxed atmosphere. After the prep was done for the KCBS meats, we had some dinner, a sample of what was to be the winning dessert entry and a few adult beverages. The pit was fired up, the big meats put on and then we retired for the evening.

Early Saturday morning is my favorite time at a competition. After ribs are put on and we have breakfast, the quiet and calm with a cup of coffee is so relaxing. The pace will pick up shortly thereafter and the turn ins go pretty smoothly. We have high hopes for the outcome, as we feel we had a good cook. After the last turn in, we have another beverage and discuss how we think we did, then start cleaning up while waiting for the awards time.

We carry our chairs to the pavilion, find a spot and hope that the judges agree with us. People's Choice is called, then Chef's Chooce and Dessert. Our friends from Feeding Friendz who gave us some of their dessert won that category. Even though we weren't at the judges table,we did have to agree with them because we did get to taste it and it was delicious, congrats Wendy!!
Chicken is the first of the KCBS categories and 1st place with a perfect score of 180 was.....Pigheaded BBQ. This was quite an honor and I must say I don't remember everything that went on then because I was in a daze. Thank you judges and all who cheered us on. I wish I could say that ribs, pork and brisket was a hit with the judges also, but that was not the case. Far from it, it seems that not much was thought of these categories because we finished 38th, 34th and 20th in that order and 20th overall out of 56 teams. Oh well, back to the drawing board. I must say that we're consistently inconsistent.
Thanks to all who showed up to support us, and as usual it was good to see our BBQ family and add some new friends to the group. Next up for us is Que for the Troops in Levittown, PA on June 6-7, hope to see you there. 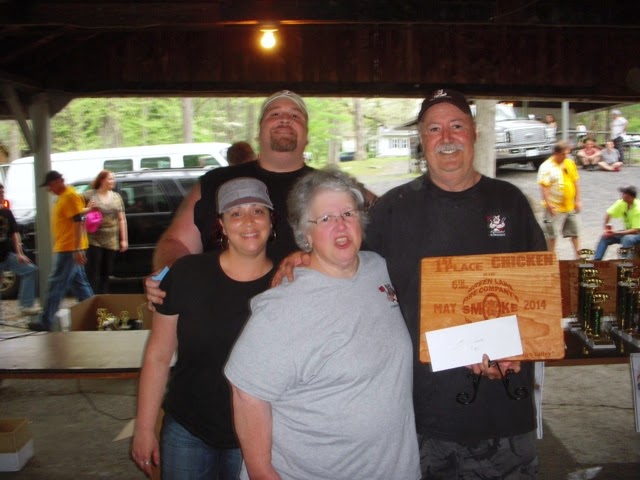 Posted by PigheadedBBQ at 7:01 AM