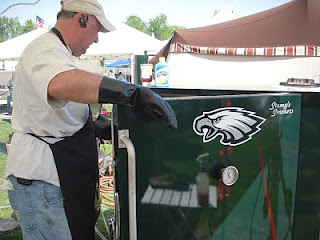 Well, after a long 12 week wait, Raquel has arrived,was seasoned and cooked on twice before her first competition. She was a little nervous standing there, ready to be fired up and loaded up with a full complement of meat for the "Pork in the Park" competition at Salisbury, MD. This is always the first competition of the year for this region and legions of BBQ teams were chomping at the bit after a long, cold winter to get back in the swing of things.

We arrived Thursday night to pick out a prime spot, as the majority of teams wouldn't be showing up 'till sometime on Friday. Salisbury is a first come first served competition, meaning there aren't assigned sites. You pick out what you consider to be the best site for you. There are as many different criteria as teams when it comes to picking out the ideal site. Some teams vie for closest to the judges tent, so you don't have to walk far to turn in your entries, some look for ease of entry and exit and I'm sure that some look for as much privacy as possible in a crowded field that was to hold 132 teams from around the country. We picked a site close to the electric and water hook-ups and in the middle of the pack so we could socialize. Or at least that's what we intended to do. It seems we never get around to doing as much as we would like.

Friday morning, we finished setting up our site and after having our meat inspected, we began to trim and prep the meats. Since we wouldn't be putting on the big cuts (brisket and butts) 'till midnight or later, we had a pretty leisurely pace going and enjoyed not being rushed. Our families came down Friday afternoon and we took the kids to the festival for the rides and enjoyed the comraderie of it all. The family went to a nearby hotel for the night and our activities began to pick up the pace getting ready to do our first cook of the season and the first serious cook on Raquel. Just about midnight, I lit the charcoal in the chute, set the guru and waited for Raquel to come up to temperature. Around 12:30AM the briskets and butts were placed inside and we were excited. It got down into the high 50's to low 60's and we settled in for the long night. Raquel hummed along throughout the night, holding at a steady 250 degrees. We couldn't have been happier about her performance.

Early Saturday morning, about 6:30AM, the ribs were loaded in and only chicken waited it's turn to be cooked to perfection. We were in a zone and things were progressing as we hoped and had high hopes for the results. The chicken turned out tasty, but alas the skin wasn't where we wanted it to be. The ribs were a tad overdone, having cooked a little faster than we were used to. The pork was good and the brisket was pretty much where we wanted it to be. Now it was in the judges hands.

So by now, I'm sure you're wondering how we did. Well, lets just say that Raquel, the newest member of the team is sueing the rest of us for non-support. She did her job, but somehow we didn't. The judges didn't like our chicken, ribs or pork and just tolerated our brisket. Not exactly the finished we envisioned. In fact, we were downright depressed. I guess we need a few more cooks on Raquel to learn her enough to correct our mistakes, but then isn't that the way with most new relationships? We will grow together, learn together and progress together. This is just the beginning of the season and we're not giving up. Look out for Pigheaded BBQ, we're fired up!!
Posted by PigheadedBBQ at 7:59 PM No comments: 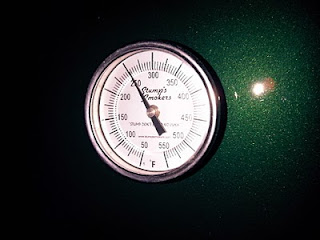 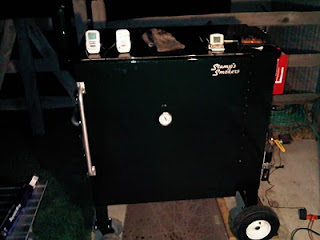