This weekend was the 1st Annual BBQ Cook-Off was held on May 21-22 at the Dutch Country Farmers Market in Middletown, DE. It was organized by Mose Zook and Ben Riehl, proprietors of the Farmers Market. I have to say that they did a great job and it was noticed and appreciated by all in attendance. Their hard work made this a very cook friendly competition and it will no doubt grow by leaps and bounds.

This was our home town competition and the pressure was on for Pigheaded BBQ to have a good showing, since so many friends and family were going to be there. We didn't do too bad and even had a walk and a ribbon for pork.

My wife Norma and I arrived around 6:30AM to begin setting up, as most of the other members of the team weren't due to arrive 'till later in the day. This also allowed a leisurly pace which was good because the competition site was situated in the parking lot and the weather forecast called for a sunny day in the mid to upper 80's and asphalt can be a tad warm in hot weather. I must say that I get tired just watching my wife work as she works circles around most people. I was ready for a beer by 7:00AM.

Mike and Trina, my daughter and son in law along with Michael and Maddie (grandchildren)arrived around noon and pitched in with site prep. Meats were injected, trimmed and put away for later preparation. Stephanie arrived next bringing more welcomed tidbits as usual. I walked around and chatted with most of my BBQ friends and fellow competitors that had shown up by then and then started some prep work on tidbits to munch on. I prepped the buffalo chicken stuffed jalapenos, the roasted red pepper/blue cheese fatties and the "Redneck Cannolis".

My son Ron v2.0 along with my daughter in law Jeanette and Wade & Reid grandsons) arrived aroung 7:30PM and my nephew Brian arrived later in the evening. All through the day and well into the night, friends and family members of the team stopped by for a chat and some liquid refreshments and to nibble on whatever was around. About 10:30 things got serious and we put the finishing touches on the butts and brisket so they could hit the smoker by midnight. This went very smoothly and everything went according to plan. Now it was time to relax for most and after ensuring that the pit and temp was stable, I decided to lay back in my chair with the intention of getting a little shuteye. I should know better, because sleep does not come easily for me at a competition. I'm like a kid on Christmas Eve and try as I might, I just can't shut the old brain off so sleep comes in little spurts totalling about 1 1/2 hours. I will add that the 3:00AM whistling train didn't help, nor did the 3:30AM street sweeper who must have been trying to get a raise because he made numerous passes in our vicinity. You could have eaten off the asphalt in that parking lot.

5:30AM arrived and I realized sleep was futile, and I got up and started the final ribs prep work and worked with the chicken before putting it back into the cooler for later. You would be amazed at how time flies when crunch time is approaching. We always worry about finishing everything in time, but it seems to work out as planned in the long run. Maybe it's the fact that the team has become a pretty well oiled machine with everyone knowing just what needs to be done next and picking up for someone else that may happen to need help. This was my daughter, Trina's first time with the team from start to finish. She did a great job and it looked like she had always been there.

Our finish, while not great, was certainly better than our last one and we did get a walk up to the stage for a ribbon for pork. We finished 18th overall out of 42 teams and placed as follows in the 4 categories:
Chicken - 16th, Ribs- 28th, Pork- 10th and Brisket-30th. We had a ball here and again want to express our thanks and appreciation to the organizers, volunteers and all involved with the successful competition that's sure to grow by leaps and bounds.
Posted by PigheadedBBQ at 10:30 AM No comments: 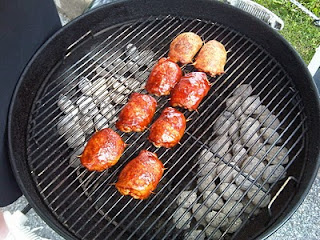 Sent via BlackBerry from T-Mobile
Posted by PigheadedBBQ at 11:27 AM No comments: 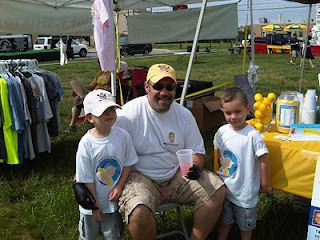 Posted by PigheadedBBQ at 10:31 AM No comments: 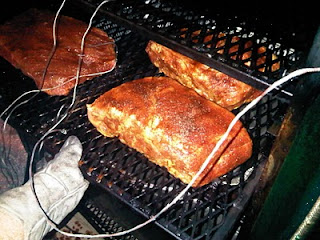 Sent via BlackBerry from T-Mobile
Posted by PigheadedBBQ at 12:05 AM No comments: