After looking at our scores so far this year, it's pretty evident that our old standby, pulled pork is no longer working for the judges. What's puzzling is the fact that it used to be our strongest entry and we haven't changed a thing. Are the judges taste changing or are we inadvertently doing something different. I thought our pork at our last competition (Shrewsbury) was our best this year, but the judges didn't agree. In fact, the only time this year that pork was our best category was Wildwood and that was nothing to brag about.

I've got a few ideas for pork and a couple of weeks before Dover to try them. That's what is so challenging about this pursuit. We're constantly trying to improve our products and sometimes it even works. This year, we started over with chicken and ribs and our scores have improved dramatically. Our brisket has been pretty consistent and has been our best category.
Posted by PigheadedBBQ at 7:45 PM 1 comment: 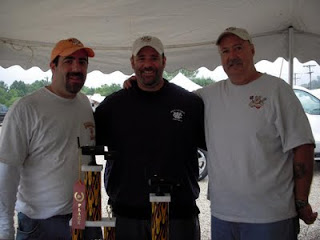 We arrived at Shrewsbury in a driving rainstorm around 10:30AM, not knowing if we would sink or swim. We met with Ben , one of the organizers and found our spot. After parking the trailer we decided to duck into the Farmers Market to stratagize and stay dry for a spell. We had a look around, a bite to eat and decided to go brave the weather and set up. We had positioned the trailer to use as a wind block and set up our canopies, tables and other necessary paraphernalia. We saw that a small lake was developing in our site, so we borrowed a shovel from our local neighborhood Pirates, (Tom & Chrissy of the Va BBQ Pirates) and filled a few buckets of gravel to fill in the low spots. Ron Jr. then became our resident irrigation specialist and dug some channels to divert the water away from the site. Thank goodness we were situated on crush and run instead of grass, or this would have been a quagmire.

The rest of the day was spent doing our normal competition chores. The meat was inspected by Melvin of New Holland fame, the meat prep was started and the site fine tuned. We did some visiting of neighboring teams. We were between Smokeopolis and Susquehanna Blue Smoke. Both were great neighbors. We chatted with Sal of Smokin' Gnome, Jim & Mark of Pequea Pullers, Tom & Michele of Lo'N'Slo and met the Pulling Pork team who were the only other team from Delaware. Since it was still raining, we decided to walk across the parking lot back to the Farmers Market for dinner. What a friendly bunch of people. They greeted all the BBQ teams enthusiastically and had lots of questions about the whole competition scene. The food was great and we had fun looking around at all the shops. We headed back for the cooks meeting and more chores.

Did I mention that it rained there? It rained 'till around 1:00AM, then more or less settled into a light mist. We put our butts and brisket on and semi -retired for the evening. Up for good at 5:00AM to get ready to put the ribs on and start the long day ahead. The cook went well during the night and once the ribs were on, we prepped the sausage and got ready to put the chicken on. Our Amish friends from the Middletown Farmers Market came up to support us. They were there to see how a first time competition looked because we are trying to convince them to host one in Middletown. My wife and Dorothy, a family friend drove up also to cheer us on. We were pleased with the chicken taste, though not necessarily the appearance, thought the ribs and pork were good and the brisket tasty, but a little tough and the sausage good. After turning in our entries, we started cleaning up and waiting for the award ceremony.

We all walked over to the awards tent and heard some good music from a local band as the final scores were tallied by the Kansas City Barbecue Society reps. During a steady rain, the ceremony started and we were surprised by being called up for 2nd place chicken finish. We were called up again in the next category for a 3rd place ribs finish. We didn't hear our name for the pork category, but were called up again for an 8th place finish in brisket. Tom & Michele from Lo'N'Slo were Grand Champs with 2 firsts and 2 second and Paul & Barbara of PA Midnight Smokers were Reserve Champs. Guess who was 3rd overall? PIGHEADED BBQ. We were stunned and very pleasantly surprised.

Melvin from Meadow Creek, Joe from NBBQA, and Ben and Alicia from The Markets at Shrewsbury did a very good job with this first year event and despite the weather the a good time was had by all. We will definitely plan on being back next year. 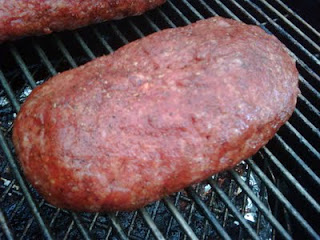 Not what you'd think, but it's everything you'd hope.

Posted by PigheadedBBQ at 10:26 AM No comments: 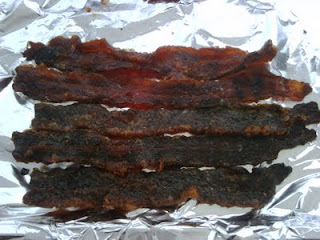 Posted by PigheadedBBQ at 10:07 AM No comments: 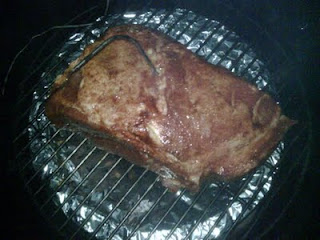 Sent from my BlackBerry wireless handheld.
Posted by PigheadedBBQ at 1:07 AM No comments: 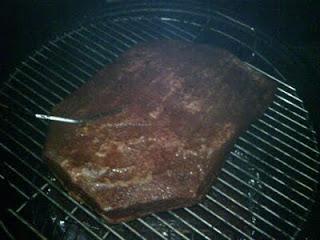 Posted by PigheadedBBQ at 1:04 AM No comments: 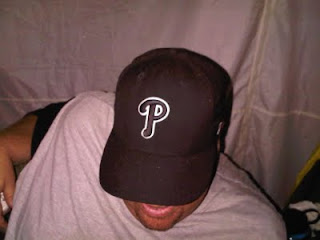 Posted by PigheadedBBQ at 12:43 AM No comments:

Grab a sack... They're yummy!
Sent from my BlackBerry wireless handheld.
Posted by PigheadedBBQ at 11:58 PM No comments: 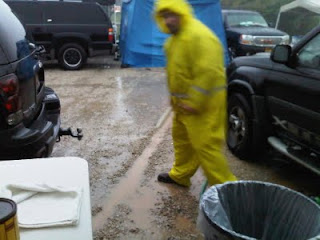 Here' s a picture of our irrigation specialist Ron Jr diverting water away from our site at Shrewsbury.
Sent via BlackBerry from T-Mobile
Posted by PigheadedBBQ at 7:16 PM No comments:

Well... The Ark made it to Glen Rock, PA despite Mother Nature's best efforts to hold us at bay. We're moist, but the site is set up sans smokers (ounce of prevention). Chicken is prepped, water's boiling, the irrigation ditches are irrigating and we're chilling with a few beers listening to some tunes.

More in store!
Sent from my BlackBerry wireless handheld.

Posted by PigheadedBBQ at 4:21 PM No comments:

Pigheaded BBQ is braving the elements at the 1st Annual Southern York County BBQ Cook-off @ The Markets at Shrewsbury in Glen Rock, PA.

The "Arc of Bark" has 2 cows, 2 pigs and 2 chickens loaded aboard and is aiming to take home some hardware and dead presidents.

Posted by PigheadedBBQ at 10:21 AM No comments:

Posted by PigheadedBBQ at 10:12 AM No comments:

Pigheaded BBQ is gearing up for the 1st Annual Southern York County BBQ Cook Off this weekend. It is being held at the Markets at Shrewsbury. This event is organized by the same great folks who run the New Holland Summerfest. Melvin and crew do a fantastic job and I'm sure this event will follow suit. Stop by if you're in the area. Here's a link to the Market.

Posted by PigheadedBBQ at 8:44 PM No comments: 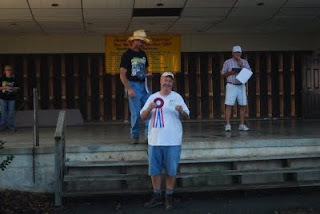 Saturday was a full day with 6 categories to be turned in, starting at 11:30AM. First up was sausage which we mixed and stuffed Friday afternoon, followed by chicken, ribs, pulled pork, brisket and chef's choice, which in our case was pecan pie. This made for a fairly hectic morning, but everything was turned in on time. We were pretty happy with most of our entries and awaited the judge's decisions.

Our smoked mozzarella cheese and roasted red pepper sausage placed 33rd. Our Chicken placed 40th, our ribs placed 19th, our pork a dismal 63rd, our brisket got us a walk with a 7th place finish and our pecan pie placed 19th.  Overall we finished 29th. Not a great performance, but not terrible considering the level of competition here.

Posted by PigheadedBBQ at 9:50 AM No comments: