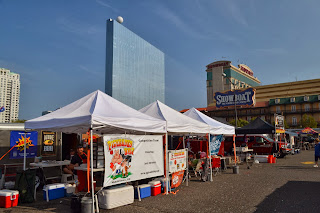 Pigheaded BBQ just finished our last competition of the year. We competed at the DO/AC Smokin’ Hot BBQ Championship in Atlantic City, NJ. This was a first year event organized by Ronnie Cates of Smoke on the Water Productions. This event had 85 teams and had to turn away 57 others due to space limitations, The total prize purse was $50,000 and we just had to try our hand at it. We were told by the organizer and sponsors that next year the purse will increase to $100,000. I think they’re going to need a bigger venue. Speaking of venues, this event was held in a very large parking lot across from the Showboat Casino/Hotel. It was very convenient for hotel rooms.
Norma and I arrived at 7:30AM on Friday, as the sites were first come, first served and we got a very good site that was close to the judges’ tent. What was a little unusual was that check in was on Friday and this was a Saturday/Sunday event with nothing going on Friday. That being said, we had plenty of time to set up our site, check into the hotel and relax. Due to their schedules, the rest of the team would be arriving later on Friday and Saturday. We had outstanding neighbors in the adjoining sites and that just makes the whole event more pleasurable. I want to thank Aporkalypse Now, Must Be Smokin Something, and Reel Nauti BBQ for their company and making it like a BBQ family, and not just competitors.
Saturday was a bit more relaxed than a normal comp as we were already set up. We had the cooks meeting at 10AM and meat inspection shortly after that. After the meats were prepped, we prepped some food for dinner and visited the other teams and shared food with each other. We also fed some of the local police and security personnel and just had a good time. A little later, we got down to business and started the competition cook. I know, I know, you not supposed to experiment during a competition but we were trying out two different meats. Since the prize money was so big, we decided to try some very upscale meats for this event. Stephanie procured a SRF Waygu brisket from Huntspoint for us and Mike arraigned to get us a Compart Duroc Pork Butt from BBQ Guru. We were “All In” as they say in AC. We hadn’t cooked either of these meats before and decided it was time to gamble a bit. We were however hedging our bets a bit by also cooking our regular Creekstone Prime brisket and pork butt along with the newbies. The brisket and butts went on at midnight and the cook was on. As usual, ribs and chicken were put on the next morning. After the cook was done, we decided our Waygu brisket turned out better than the Prime and turned it in, but decided our usual pork butt turned out better than the Duroc and turned that one in. It was all in the judges hands now.
After cleaning up, have a few cold beverages to celebrate a pretty smooth cook we went to the awards ceremony hoping to hear our names called and be able to cash in. This event paid down to 20th place in the categories and 10th overall. In the chicken category we heard Pigheaded BBQ for the 3rd place call. That was a great start.  In the ribs category we heard Pigheaded BBQ for the 13th place call. So far so good. We didn’t hear our name called in the pork category. In the brisket category we heard our name called for 18th place. So in summation we finished as follows: 3rd Chicken, 13th Ribs, 64th Pork, 18th Brisket and 15th overall out of 85 teams. Yes we did have a good cook.


Well our 2013 BBQ competition season is over. We had an up and down year, ending on an up note. A big thanks to all the team, family and friends that supported us all year. We would also like to thank our sponsors, without whose help we wouldn't do as well as we have. Thanks to:
Fordham Brewing Co., Haines Pork Shop, Oakridge BBQ, Pat LaFreida Meats, Stoltzfus BBQ, The BBQ Guru and The BBQ Equipment Store.

Next up for us is Oct 30th. We are the guest chef at World Cafe Live in Wilmington, DE from 6-10PM. Would love to see you there.
Posted by Ron at 6:07 PM No comments: