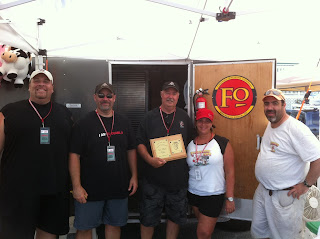 Well, the NJ State BBQ Championship started out as a wild, wild Wildwood day. Norma and I arrived early Friday morning and were greeted by a light rain. The canopies were quickly put up and the necessary equipment was brought out trying to beat the heavy stuff that was called for due. Stephanie arrived with help in the form of our good friend Billy and they helped complete the set up. Mike, Trina and kids caught the ferry over and Ron v2.0 arrived in the afternoon after conducting some business. It got progressively worse as the day wore on. It ended up quite the deluge with approximately 3.5 inches of rain falling on Friday. Some of our canopies are aging as are we and they weren’t the most watertight shelters. We spent the day diverting water and trying to stay dry, which wasn’t always successful. By the time the 7:00PM cook’s meeting came around, the rain had stopped and we didn’t really have any more weather issues.


The cook’s meeting brought two pleasant surprises. The Iron Chef’s mystery ingredient was Jumbo Shrimp. I know, that’s an oxymoron but we were happy nonetheless. Another surprise at the cook’s meeting was the announcement that the new KCBS scoring system was in effect as of this weekend.   Ron v2.0 and Mike put their heads together and ran out to the store to get more ingredients for the Iron Chef category and Norma got busy cooking for the dessert category. I on the other hand pretty much had the day off as meat inspection and prep for the KCBS categories wasn’t until Saturday. After a long day, Stephanie and Ron held up the fort, while the rest of us retired to our hotel rooms at Flip Flopz, just across the street.


Saturday brought the usual prep work and I must say it felt a little weird.  This competition is a bit of an anomaly in that it is a 3 day event and the KCBS portion is on Sunday. Usually our competitions are held on Friday and Saturday. I know it doesn’t sound like much, but it does mess with your mind a bit, at least it does mine. There was prep for the 3 ancillary categories as well as the 4 KCBS categories. Anyway, Saturday was a gorgeous day weather-wise and all went smoothly. Iron Chef turn in was 3:00PM, sauce was 3:30 and Dessert was 4:00PM. We had a number of friends and family stop by and all had fun. Then we got down to business with final prep work and putting the big meats on the pit at midnight. Mike, Ron and myself stayed back at the site and the rest of the crew retired once again to the hotel rooms.


Sunday morning brought about the normal hectic ballet of coordinating of the 4 meats and we felt we had a pretty good cook. Of course no one mentioned that as it usually is a “Kiss of Death”. Whenever we think we had a great cook, we don’t fare well and when we think the cook was so-so, we do better. So while we may say, that tastes pretty good,  no one will predict how it will score. The usual turn in times applied and chicken turn is was noon, ribs 12:30, pork at 1 and brisket at 1:30. All turn ins were on time and now it was time to start cleaning up and waiting for the awards ceremony at 4:30.


It was blazing hot by 4:30 and we waited out in the sun for the ceremony to start. We didn’t hear our name called for either Iron Chef or Sauce, but did have a top 10 call for dessert (7th). The chicken category was next and we heard Pigheaded BBQ called for 6th place. A 3rd place Ribs call was next, but alas no calls in Pork or Brisket. We did feel that we had a good cook and finished as follows:


Iron Chef 18th, Sauce 39th, Dessert 7th, Chicken 6th, Ribs 3rd, Pork 15th and Brisket 34th. Overall we finished 10th out of 65 teams. No bad, but not as good as we’d hoped. Congrats to Local Smoke for their GC, Rib’s Within for RGC and one of our sponsors BBQ Guru who finished 3rd. WTG guys, congrats on your good cooks. We also want to give a shout out to our friends and neighbors, Slower Lower and Finn’s Finest for putting up with our crowds and antics. You guys are the best. Thank you also to all the friends and family that showed up to lend their support. It means a lot to us. Our next competition is in Laurel, MD for the Sam’s Club local event in August 16-17. Hope to see you there.